Ten Star Wars 3D Prints To Make Into a Planter

Before discussing Star Wars 3D prints, it is fun to take a trip down memory lane. It was the end of May, 1977, and George Lucas was about to release his new film. However, he was certain that the film was destined to be a huge flop (as was the studio, the actors, and everyone else in Hollywood). So, he followed his usual routine: he went to Hawaii to get away from it all.

Of course, the film was an instant success with fans and movie critics alike. Indeed, it became a cultural phenomenon almost instantly upon its release. Adjusted for inflation, it ranks #4 on the all-time highest-grossing film list, and it has spawned numerous film sequels, television shows, and merchandising licenses. Indeed, Star Wars has become woven into the fabric of society. Even people who have never seen one of the movies almost instantly recognize the names Darth Vader or Yoda; the line “I am your father”; references to a galaxy far, far away; and the iconic theme music. In this way, Star Wars definitely ranks as one of the most influential films of all time.

One of the most fun trends to emerge from the rise of 3D printing is an ability to create your own movie memorabilia. As you would expect, there are many Star Wars STL files in existence, and they are certainly fun to create. However, with some slight modifications, you can use these Star Wars 3D print files to make your own unique 3D planters. That way, the force can make your herbs grow, and the Rebel Alliance can protect your flowers from pesky aphids.

Not sure where to start? Check out our list of ten of our favorite Star Wars 3D prints that can easily be used as a planter!

Though die-hard Star Wars fans knew of the Mandalorians many years earlier, the race of warriors has become much more common knowledge with the release of the hit show on Disney+. Din Djarin is the real name of the title character of the series, and he serves as a bounty hunter throughout the galaxy. His iconic helmet is one of the most popular Star Wars 3D prints.

Since the helmet is designed to be worn, it is already hollow. With one hole in the top of the head, you’ve got a wonderful planter, one that you know will protect your plants at all costs. Find the files at Thingiverse and have fun!

An FYI in case you are relatively new to 3D printing: to get the colors just right, many people prefer to print in a neutral color, like white, and then paint their creation. However, if you are looking to create this helmet with just one filament, a silvery one would be a good choice. 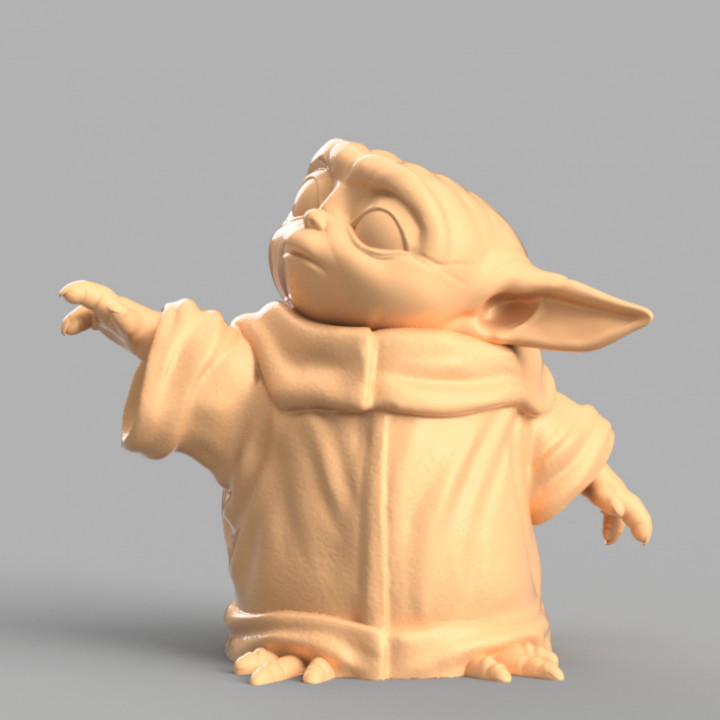 Speaking of The Mandalorian, the Disney+ show also introduced this character who has gone on to break the internet and feature on merchandise around the globe. His real name is technically Grogu. He is also known as The Child. However, let’s be honest: everyone knows him as Baby Yoda.

The STL files for this one create a pretty small figurine.  However, there are many other users who have printed this Baby Yoda at 150%, and it turns out great.  That would be a more appropriate size for a planter. Again, you can create a hole in the 3D print for your planter. Another choice would be to simply place your Baby Yoda on the rim of a traditional 3D planter or next to your plants right in the garden. No matter what, his connection to the Force is certain to fertilize your flora.

If you want the Force to be very strong with your plants, then you may not want the baby Yoda. Instead, print adult Yoda, you must. The great news about this particular Yoda 3D print is that it was designed to be a pencil or pen holder. Therefore, the design includes a perfect-sized notch right between Yoda’s signature ears. Just put some soil in there, and you have a unique 3D planter.

Again, if you are hoping to make this Yoda 3D print with just one filament, Cloverleaf Metallic Green would be a nice choice.

If a casual fan knows only one ship from the film series, it is almost for sure the Millennium Falcon. Han Solo’s heavily-modified vessel is the cornerstone of many scenes, especially in the original trilogy. The Falcon is called a “hunk of junk, “bucket of bolts,” or just “good enough,” but it still holds a special place in the heart of most fans.

Again, this Millennium Falcon 3D print file  creates a pretty small figurine, so you may want to print it at 150% to make a better size. Cutting a hole in the cockpit would make a very cool 3D planter. You can also grow your vegetation in between the protruding mandibles.

To give this classic ship its aged look, use a granite filament with a bit of dust, dirt, or paint.

Darth Vader is considered by many to be the greatest, most iconic villain ever created (or at least in the top five.) Of course, then there are others who proclaim that he really shouldn’t be considered a villain after all. No matter what, he is, in many ways, the most famous face in the entire Star Wars franchise, so this list would definitely not be complete without a Darth Vader 3D print.

This model is a great one to create a unique 3D planter. After all, the designer created it as a piggy bank. Therefore, you can take off the plug and instead fill the Dark Lord of the Sith with soil and seeds. I dare any squirrels to try to eat those seedlings without getting Force-choked.

Another benefit to this model is that it looks great being printed with just a classic black filament. Translation: There is no need to paint this planter for it to look like the real deal!

If Darth Vader himself is a bit too intense for your home (or if you decide he needs some sidekicks), perhaps a Stormtrooper helmet 3D print is for you. This model is an excellent choice for a 3D planter because, again, you can print it using just one color, with no painting, and it looks great. Another plus is that this model is nice and large, so there is plenty of room to plant. For that matter, you could disguise a boring old regular pot by placing this helmet right over the top.

Of course, if you make any planter resembling a Stormtrooper, you do need to hope that it has better aim knocking out any herbivores than Vader’s forces do in the movies!

Before we leave the Dark Side for good, we have to discuss the Imperial fleet’s most ubiquitous aircraft. It is as sleek as it is lethal. Just the sound of its engine strikes fear into rebels. However, its shape makes for a very cool 3D planter.  Simply create an opening in the top of the spherical cockpit in the middle, and you will have a very unique vessel.  Alternatively, you can place two TIE fighters back-to-back. Put the solar array wings touching and the viewports facing out in opposite directions. Then plant your flora in opening in the middle, protected on all sides by a sophisticated fighting machine.

The STL files are available on Thingiverse. Black, gray, or even a bluish-gray are great colors for the sphere in the middle of the machine. This translucent iridescent ice filament adds a very nice effect on the wings.

OK, that’s enough of the villians. Time to return to the guardians of peace.  Casual fans may not know holocrons as well since they never appeared in any of the movies.  However, all true Padawans know that Holocrons hold valuable Jedi teachings.  Plus, let’s be honest: this Star Wars 3D print would make a really cool 3D printed planter! Simply create a hole in one of the sides or make the cube without a top. Plant your favorite flowers or herbs and suddenly, everyone will want to know how you create such lush vegetation. Of course, like any good Jedi, you will keep that secret safely inside the holocron.

As long as we are on the theme of heroes, we must discuss the hero of the Star Wars trilogy.  Nope, not Luke. Nope, not Han Solo. It’s everyone’s favorite droid. Even George Lucas admits that R2-D2 is the real hero of the series, saying, “Whenever there’s a pivotal moment of real danger, he’s the one that gets everybody out of it.” Who better to save your plants if your thumb has no hint of a green tinge?

One huge (no pun intended) advantage of this R2-D2 3D print file is its size. It is large enough to hold some pretty hefty plants, even with a relatively small hole in the top of the dome.

OK, yes, the lightsaber is a little trickier to make into a planter. However, you must admit that a small aperture at the end of the handle with some really bright colors coming out would make for a really cool effect.  Another option is to use air plants, since those do not need any soil to grow and often grow long leaves.

Besides, what list of Star Wars 3D prints would be complete without a lightsaber?!?!  And by all accounts, this model is really easy to make. So even if you don’t use it for a planter, it is a must-have addition for any fan.

Any of these Star Wars 3D prints would make for very fun and unique 3D printed planters. If you are a big fan of the film series and of 3D printing, you could make an entire garden (either outdoor or indoor), using planters inspired by Star Wars. That way, your plants could forever take part in the epic intergalactic battle between good and evil. Just be sure that the strongest, longest-lasting plants are with the Jedis and not the Empire. We wouldn’t want to disturb the Force.

About the Author: PrintAPot Tech

PrintAPot Tech is brought to you by the people behind Print A Pot, a 3D printing business that specializes in 3D printed pots and planters. We've been successfully designing and making 3D printed planters for several years, and want to share that knowledge with you so you can make happy homes for your plants.